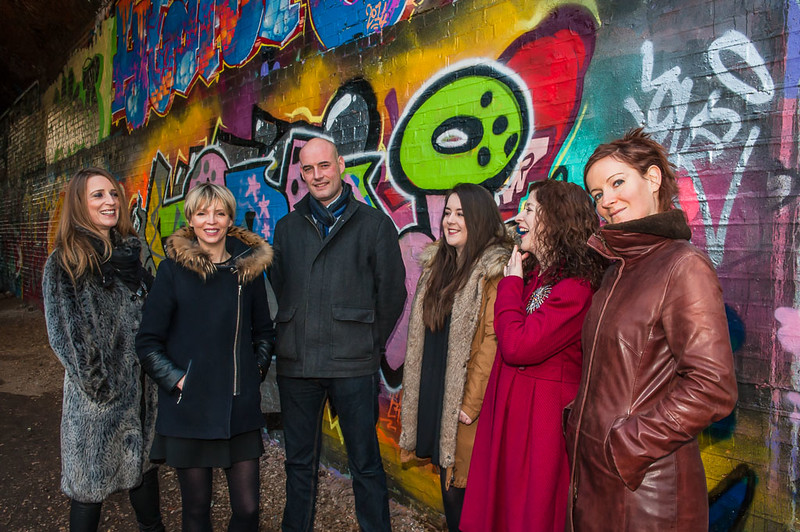 Described by Irish Music Magazine as “one of the best bands on the scene today”, the traditional Irish group The London Lasses have released four critically acclaimed albums with pianist, Pete Quinn.  The band is about to release their 5th album with pianist/guitarist Chris O’Malley. Also newly into the fold is concertina player Brogan McAuliffe. The new CD – featuring guests musicians Colm McGonigle (harp), Maureen Linane (accordion) and Aibhilín Nic Eochagáin (accordion, flute, backing vocals) – launches in 2015. Details will be announced shortly.

Released in 2010 to celebrate the band’s 10th anniversary, By Night & By Day features an exciting new line-up with the addition of flute player Elma McElligott and singer-harper Brona McVittie. The album delves into a wealth of traditional material from all over Ireland, including songs in Irish and English, plus the full gamut of Irish dance tunes, from the venerably ancient to the newly composed.
The London Lasses have toured Germany with the St Patrick’s Day Celebration Festival, performed the first ever ceilidh in the Royal Albert Hall as part of the BBC Proms, and played at Ireland’s longest running folk festival, Ballyshannon. They have brought their unique sound to some of the world’s most prestigious festivals and concert halls including Cambridge Folk Festival, the Concertgebouw (Amsterdam), Glastonbury, Philadelphia Irish Festival and Sidmouth International Festival.
Recent highlights include headlining at Dublin City Hall as part of Temple Bar Trad Festival’s celebration of The Gathering, closing the night after Camille O’Sullivan’s performance at the St Patrick’s Day Festival in Camden’s iconic Roundhouse, appearing on BBC Radio 3’s In Tune, supporting The Chieftains on their 50th Anniversary Tour appearance at the Royal Albert Hall, plus opening and closing TG4’s Christmas edition of the TV programme Féilte.
In addition to featuring on ARC Music’s double CD ‘The Ultimate Guide to Irish Folk’ (2014) and the 3-CD box set Beginner’s Guide to Ireland (Nascente, 2005), the band has appeared on UK and Irish TV including Backstage (BBC Choice), Ardán and Geantraí (TG4), plus a memorable turn on EastEnders (BBC1).’
To find out more about the band, hear their music or buy their CDs, please visit their website at: www.londonlasses.net or join them on facebook at: www.facebook.com/londonlasses